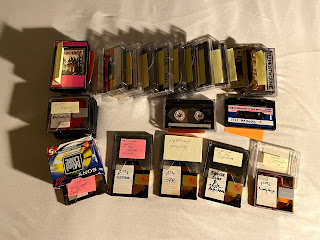 the job has been done one year ago and I have only kept the last few tapes and minidiscs, all the rest is long gone now. there were two boxes (and hundreds of tapes therein) as I used to record every single rehearsal by my band brachland, so all the good ideas we had didn't get lost. but of course with new ideas every week (and some lazy ass band lol) we forgot about most of them. since I have to tug tons of stuff everytime I move flat, I wanted to get rid of things I don't need anymore. but this band has always meant everything to me and I remembered some funny stories I didn't want to throw away. the hostility we each showed each other everytime the band split up again or someone got kicked out has left some wounds. but I want to remember the band again as what it used to be: I was able to spit out my anger and looking back this was the first time people put some trust in me. so whenever there were problems downstairs in our rehearsal room ("the bunker") the authorities called me and asked to sort it out as they knew I can do it.

so. what you get now is 2 hours and 12 minutes of very very funny jokes (in our native language, you won't understand a word) and infernal noise as all those tapes were recorded on the very same portable cassette players we carried around when drinking in the streets. hear us making fun of the cover-band that used to rehearse next door (not on this recording: "Sleeping In My Car", "Rockin' All Over The World"/"Whatever You Want" and their painful adaption of "Paranoid") and re-arranging some of the best chart hits in the year 2000 (not on this record: "The Venga-Bus Is Coming"). there is a dozen of really cool ideas we used to (errr...) jam around with and I tried to include all the old songs, noone ever heard but us. unfortunately I wasn't able to save a tape or minidisc containing the songs "Scientology City" (sweet poppy guitar by Michi aka Ronner), "Schatten Über Könitz" (has a Samba-part that made no sense) and a song, marked as "instrumental". "BRACHLAND Theme", "Trümmerfeld" and "Ende Des Jahres" never were played as full band and abandoned after one night.

but yeah - I'm pretty satisfied with what I can present to you now.
it wouldn't work as a cassette of course but I have decided to divide the tracks in a way it looks like side A and side B. and since there are twelve tracks on each side we have another 212 reference. hooray! 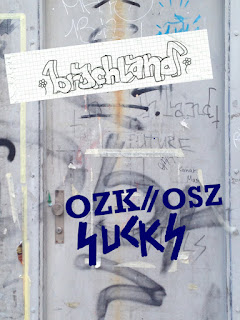 the cover shows an entry next to the 212-Bunker which used to be located outside a school called OSZ.
OZK respectively during the first line-up of the band.
a band, whose founding members used to visit that very school years ago...