there was a nice buzz around brachland even before we played our first show. people weren't allowed to visit us during rehearsals but people just knew this is gonna be a great band. I remember getting on the bus once and - in the last row - there was this huge Edding-painting of pure heavy metal imagery - and on top: our logo! definitely not my work :D but thanks anyway!

our song "3098" was responsible for an aggressive series of vandalism - especially on the bus & train lines that led to our small village and we had to drop our first bandname because of some very active members or friends of the band promoting the group via graffiti.

but a major impetus for our popularity was the fact we were on the internet. the public web was still pretty young back then and showing some presence was influencing. our page was established by some nice lad - also responsible for the visual appearance of a small but radical group called A.R.G. that soon attracted some attention by authorities you really don't want to have around.

brachland and the A.R.G. suddenly were in the main focus of a local neofascist group that was led by some total-nutter. at the same time the band was accused of being this-and-that by the heroes that posted stuff on indymedia, sharing informations that you were only able to know if you were around and visiting our concerts. and since I didn't work most of the time and daily drinking I had lots of time to feel responsible and answer each and every accusation on the web. one night some (then-) close friend told me: "you gotta check indymedia! earlier today we've written some more bullshit about your band there, let's see how people react!" and I had to realize it's mostly ourselves taking part of those discussions about our band, everyone else was just scrolling...

anyway -  we had our homepage and I used that thing to publish some essays and political rants. lots of positive feedback there. and most important: people constantly were moaning not being able to understand what I was "singing" and we never printed that lyric sheet planned - so the song lyric were finally available to check via our page.

during the last few years I crawled through the tons of paper I kept from the brachland-days. I was always sad we weren't able to use more of these lyrics but bandmembers weren't always that dedicated to what we were doing. reading the old stuff is ok. but today I'm glad some lyrical thoughts never made it out there. I'm happy even most of the political lyrics were written from my own personal stance. some later stuff in line-up-three was just written for the cause but didn't represent myself even back then. back then I was just happy having my mate around me but musically and lyrically I was entering new territories while the punk/political scene tended to look backwards. and now? 2021?! I have changed, the world has changed - and some things never will, I guess.

but let's turn back the clock now.

This is the table of contents in an old lyrics-folder, listing our songs in order of starting to work on them: 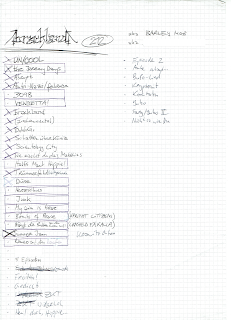 These are three pages of the lyric-sheet we planned to print: 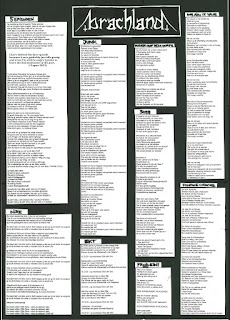 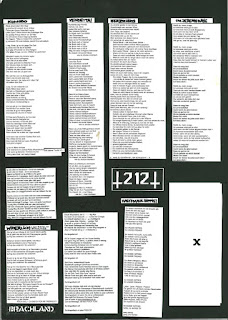 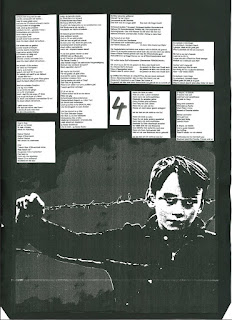 the rest of the old songs: 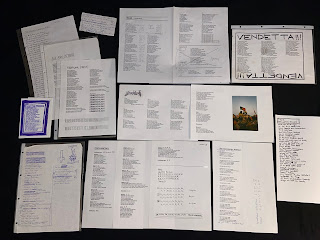 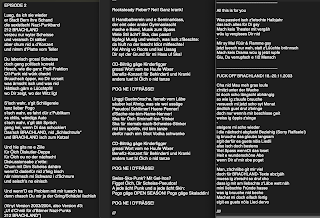 in autumn 2003 we were contacted by some local blackmetal/industrial/ambient-label. the guy that used to run the label was interested in Hardcore/Punk. in fact he even had a fun-project going on for years, playing some early-german-hardcore-style tracks. lyrics were disgusting but personally I thought, this is some edgy art-stuff and we wanted to release our racket at last! plan was to release a split-12" or 10" record with the guys band on the flipside, the label pays. I decided to pay half the costs (because I wanted to start my own label anyway) and everything seemed to be fine. we recorded some songs at the 212-Bunker (our rehearsal room and hang-out-place for local kids) using professional microphones Graber (and his family) and Brian were able to offer and my family (thanks!) drove around the get the equipment. Graber had some ideas how to record everything with the limited conditions we had and did an amazing job, Mänu painted some fantastic record covers for us but as you all may know: in the end there was no vinyl release.
during the recording sessions/a little bit in advance/a little later it became obvious we're not going to carry on the band. maybe do a release show and try again after some months of recreation or release the record as finale. the record label suddenly pulled out anyway and first I planned to release the album on my own. but with the band breaking up and myself moving to a new flat everything else became more important than this piece of work. what you can see below is the original insert of the split-version - seven tracks, one of them not mentioned. the later (brachland only) version would have been very similar to our "Bunker '04" album on bandcamp.
money wasn't such a big problem (yeah go on and tell the contrary lol) but I will be in love forever with that first album by BABY JAIL including ads for their friends store. when I was a kid there were lots of record stores and I spent my free time hanging around BRO, CHOP, Q-TIPS and especially the RECORD JUNKIE (vinyl & tapes - CDs used to be the enemy!). later, when I started buying CDs I also became a regular at the more common shops. and even OPUS71 was an expensive one, I went sometimes there because the shop had a modern vibe (and one of the employees looked a bit like Tracey Thorn). this shop was specialized in leftfield music, jungle/triphop/electronic stuff, jazz and classical music and suddenly there was this huge collection of re-released British Oi! and Punk-classics. that's how I became friends with Stef & Sam - the two guys behind the counter, that also started the ROCKAWAY BEACH-store when OPUS71 closed its doors. ROCKAWAY BEACH again was critizised by the local punkscene because of their high prizes ("but still I'd buy that EXPLOITED-hoodie for 60quid") but in fact this was a real punk record shop! and when Sam sold his old record collection (he was there from day one but changed style a bit and ran some metal & hardcore record shop before moving to Berne) he never ask for silly collector prizes. and that's the reason why we planned to print an ad on our inlay. when seeing the draft Sam just asked: "you know our ad is the only thing you're able to read here?!" and handed over some cash. so. good memories. good people. 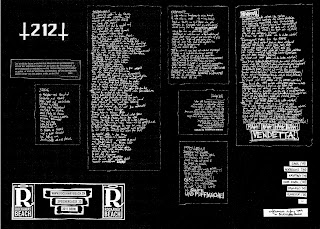 Pfifus RECORD JUNKIE was just about to fold in while we were recording, so there was no sense in showing some support anymore but this shop will be remembered forever! ROCKAWAY BEACH still exists but is now run by some REITHALLE THUN-dudes, if you're into glamrock you should check them out (same address as above). CHOP RECORDS used to be located at (almost) the very same address on which you can find ROCKAWAY BEACH today, later moved to the center of the city (records & cds on two floors!) but sadly lost all the customers and was relocated to a basement before closing in 2017. go and visit SERGE&PEPPERS if you're in Berne in search of the CHOP vibe. The RECORD JUNKIE vibe you probably will find at VOODOO RHYTHM HARDWARE STORE but make sure chief Beat-Man himself is around. otherwise you probably will get served by some nauseating heavy metal type guy. there may other record shops we around, every one and then a new one pops up but I have lost contacts a bit and at the moment shops are closed anyway. while you're probably sitting at home, panting for physical releases you should check out www.RINDERHERZRECORDS.ch
sincerly yours
the artist formerly known as Lepra